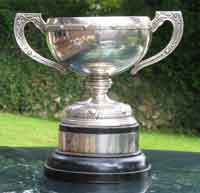 The Guaire Cup was established by the people of Gort through the St Colman’s Park Com­mittee to support hurling between teams in Galway and Clare while also creating an event which would encourage trade into the town of Gort. The cup itself was made in Dublin by Awright and Marshall in 1951. Crafted from sterling silver with exceptional celtic design and bearing the following inscription:

The Connacht Tribune reported on April 2nd 1951 of a “strong body of voluntary helpers assembled for the purpose of making blocks with the committees new concrete block making machine.” The many blocks were being used to erect a sideline of seats for the estimated 1,000 spectators for the upcoming Guaire Cup tournament. The committee were determined that nothing would be left undone to make St Colman’s Park ready for the competition which was sponsored by the Rev Fr Moroney C.C and the referees appointed were Paddy Fahy (Kilbea­canty) and Mick Quaine (Clare).

The same publication followed up with a report on April 28th 1951; “block making continues to occupy the evenings of the energetic committee…..Gort will be the Mecca of hurling enthu­siasts from Clare and Galway.”

The following year on March 29th 1952, the St Colman’s Park Committee made arrange­ments to hold the much anticipated Guaire Cup Tournament on Easter Sunday and appointed the following stewards: Tim Considine, James Murray, Ned Roche, Patrick O’Connor covering the gate with J.J. Coen, Patrick O’Shaughnessy, John Kelly and Martin Brennan assigned to field duties. Minutes of the committe meeting stated “it was decided to pay county board rate of travelling expenses to visiting teams. And it was announced that the local GAA club had agreed to pay a rent of £10 per year for the use of St Colman’s park pitch.”

The Clare Champion reported on the first Guaire Cup semi-final, Gort versus Whitegate. The Clare side were the hot favourites but Gort proved a surprise with a full time score of White­gate 2-6 to Gort 2-6. The 2nd semi-final was between Newmarket-on-Fergus versus Castlegar which ended 9-6 to 6-1 in favour of Castlegar. The replay of the Gort v Whitegate pairing brought victory to Whitegate (4-4) to Gort’s (2-3). The inaugural tournament final was played on the 22nd April, 1952, Castlegar 3-11 beat Whitegate 4-3. The Clare Champion reported; “Castlegar were worthy winners of the Guaire Cup when they beat Whitegate in the final in Gort on Sunday in a game that reached great heights at times.”

A Guaire Cup match in April 1972, between Castlegar 5-8 to Gort 2-4 in a one-sided semi-final. The second game was between Crusheen and Tommy Larkins; this game was brought to an abrupt end in the second half as a Crusheen player was injured, resulting in a pitch invasion where a Larkin’s player was chased off the field. The tournament was sponsored by Bernard Coen and Sons.

Sixty-two years later and the Guaire Cup is still competed for and is now being played in Au­gust each year, with teams as far away as Ballyboden, St Enda’s Dublin, Kinnity Offaly, Coolderry Offaly, Borris-Ileigh, Co Tipperary all having competed. Past winners include: Castlegar (1952, 2004, 2008), Sixmilebridge (2006), Ardrahan (2013), Gort (2011, 12, 14). Intercounty players who have taken part in the tournament with their clubs over the years include: Ger Loughnane, Davy Fitzgerald (Clare), Gerry Holland, Alan Kerins (Galway), Gary Maguire (Dublin), Pat Delaney (Offaly). 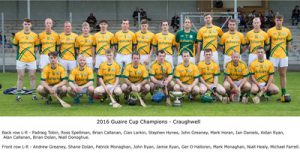 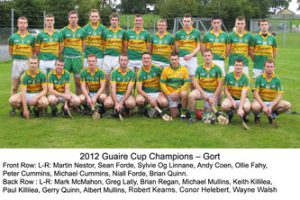 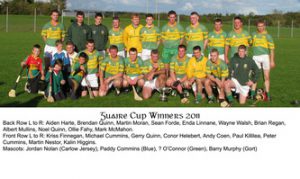 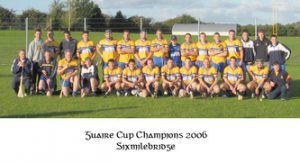